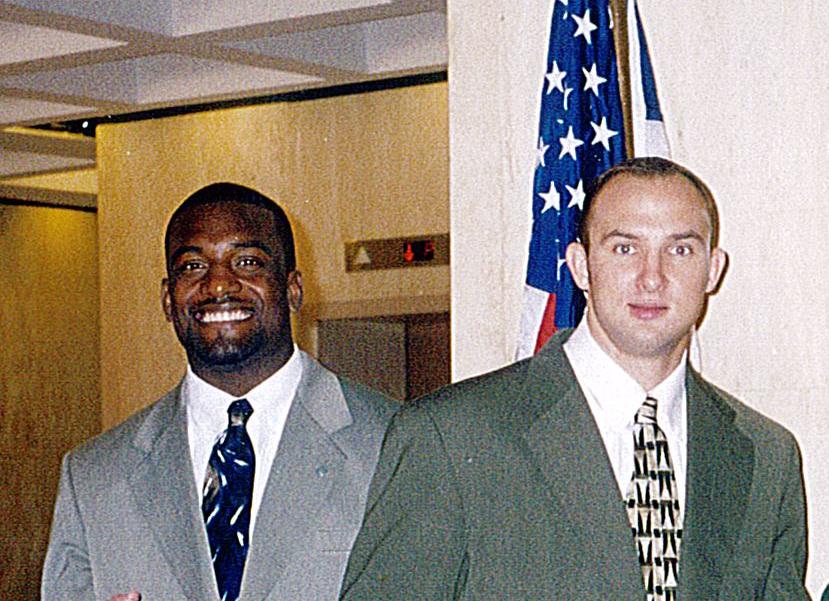 Luckily, for Olson, and judo in the United States, the Leon County Judo Club held their workouts, a short distance to the north, at the YMCA in nearby Tallahassee.

From those humble beginnings, the Sunshine State Games, still in its infancy in the 1980s, was a steppingstone to becoming one of only two judoka to compete in four Olympic Games.

He was on the field in Atlanta when Muhammad Ali lit the torch. He was in Athens when Michael Phelps won eight swimming gold medals. He was in Beijing when Usain Bolt ran the 100-meter dash in 9.69 seconds.

His life on the mat has come full circle since hanging up his Gi competitively in 2008.  Now 40 years into the sport, Olson works behind the scenes with USA Judo, serving on a task force to keep athletes involved in the sport well after their youth years.

“There’s a decline in keeping kids involved past a certain age,” Olson said. “Competition is heavy in youth and teen years but dwindles as the age increases.”

Now 47 years old and living in River Falls, Wisconsin, Olson began in the sport of judo at six years old in 1979.  He began on the local level with the Leon County Judo Club and advanced to statewide competition in the Sunshine State Games in the 1980s. He won the Male Junior (15-16 years old), 156-173 lbs. and 174+ lbs. gold medals at the 1989 Sunshine State Games.

He scored wins over athletes from Miami, Tampa, Lakeland and Brevard County to win the gold.  Competing against athletes from various areas of the state enhanced his own talents.

“The Miami area had fantastic competitors, and it was the place where we got the most experience,” Olson said. “The Cuban American athletes were always going on to the Junior National teams. We were down there all the time training and competing with those guys.”

His path continued to the USA Judo National Championships, to the U.S. Olympic Festival, to the Pan Am Games, the Judo World Championships and finally the Olympic Games.

After winning the 1989 gold medals at the Sunshine State Games in Gainesville, Olson relocated to Colorado Springs and the USA Olympic Training Center. At 17-years old, he was the youngest athlete at the training center, a new time for the sport.

“I was away from my parents, living in an apartment and working toward graduating from Coronado High School,” he said.

His Leon County Judo Club coach Fred Hand agreed he was ready to continue his training with the top judo athletes and coaches in the country, even during his teenage years.

He recalled a trip to a tournament in Atlanta when Olson was thrown by an opponent, and rather than landing on his back on the mat, he acrobatically rolled out and ended up on his feet.

“He made it look easy,” said Hand, who qualified for the 1980 U.S. Olympic judo team that boycotted the Moscow Olympics. “He had to get more exposure with those coaches at a higher level. It was the best thing for him.”

He won the bronze medal in the Middleweight Division at the 1997 Judo World Championships in Paris and had a seventh-place finish at the 2000 Olympic Games in Sydney.

“The Atlanta Olympic Games were nice since it was my first and lots of family members were able to attend, but Sydney was special in 2000 because it was my best finish,” said Olson. “The people in Australia did such a good job organizing the Games and were so nice.”

After a disappointing finish in 2004, he retired from competition for a more than a year and was ready to focus on other things.

Scratching the itch wasn’t easy for the 30-something athlete. The road back was harder than the road to, he admitted, and was injured more during that comeback than throughout his entire career.

Following a first-round loss in Beijing, the 35-year old Olson walked away from the mat for good, but not from the sport that gave him the opportunity to travel the world and experience the sport at its highest levels.  He began his own travels instead.

While working as a Manager of Asia-Pacific Operations AnyTime Fitness, he lived in Singapore and traveled throughout Southeast Asia from 2015-17.  He has served on the USA Judo Board of Directors and served as a clinician for youth judo clinics around the country.

He returned to his roots earlier this year, hosting a training session at a tournament in Tallahassee, put on by his brother, Scott and best friend since childhood, Danny James.  The three North Florida natives are now working with new athletes, creating athletes, getting them on mat and educating them in the sport of Judo.

“They’re trying to keep the dream alive,” said Olson of his brother and friend.

The dream of another Olympic hopeful, from Florida, to make their way from the Sunshine State to Paris in 2024 or Los Angeles in 2028.