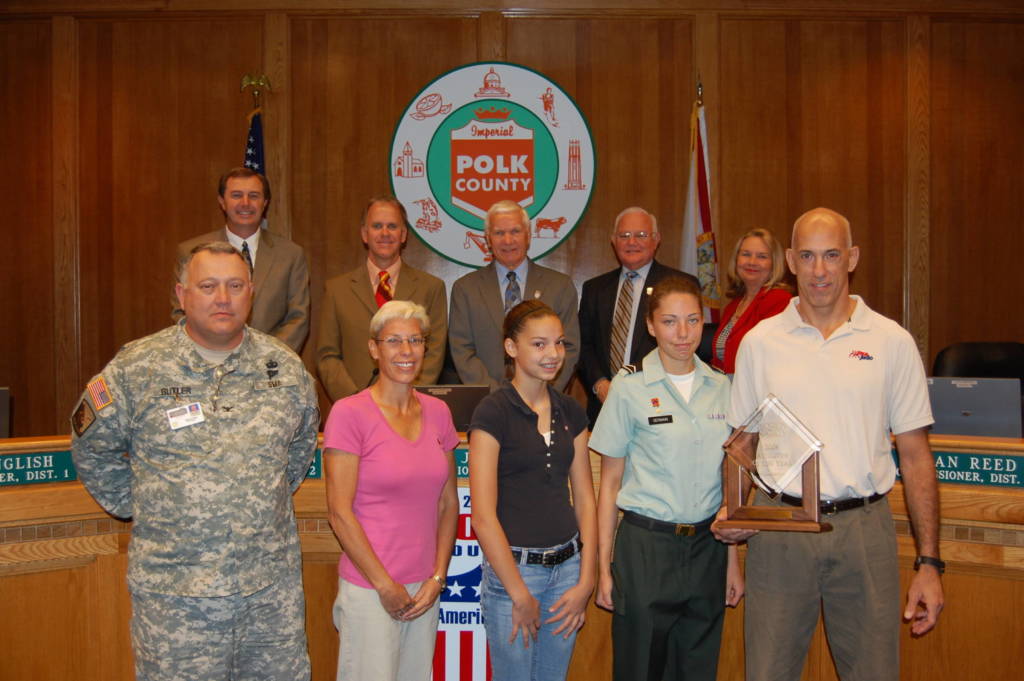 TALLAHASSEE, Fla. – Polk County’s first family of Judo, the Germain family (Brian, Chris, Katie and Kelly) was a constant in the annual Judo competition since 2000.  Their ongoing support and success in the Sunshine State Games earned the family the 2009 Sunshine State Games Athletes of the Year.

The Germain family received their award at a Polk County Commission Meeting in July 2009.

Each member of the family played a part in the Sunshine State Games Judo competition in 2009 from start to finish.  From recruiting competitors, to venue setup, to technical assistance at the scoring table to competition, and winning matches and medals on the mat, Brian, Chris, Katie and Kelly Germain were invaluable to the success of the Judo event in 2009.

“The Germain family has been crucial to the success of the Sunshine State Games Judo in Polk County,” said Fred Hand, the Sunshine State Games Judo Sport Director and friend of the family, in 2009.  “Each member of the family and the club members from Summerlin Judo, where Brian is an instructor, have helped with the event and making it run successfully.”

Brian and his daughters competed in Sunshine State Games judo for the 10th consecutive year in 2009, and he served as the local Judo chairman when Judo was held in Polk County.

At the 2009 Games, Brian won the Master’s Division 100kg weight class gold medal. Katie won the Juvenile Division 54-61kg weight class and was named the Most Outstanding Junior Female Performer. Kelly was a gold medal winner in the Female Intermediate 2 (11-12 age group) 50kg weight class and Chris won the annual Spirit of Tai Yosheda Award, given to a Technical Official or Referee.

“We’ve had plenty of family highlights since winning the Athlete of the Year Award in 2009, but that was a big one at the time,” said Brian. “The award is prominently displayed in my office.”

Katie Germain, now 25 years old, graduated from George Jenkins High School, where she was the state’s first four-time female state wrestling champion.  She received a scholarship to King University in Bristol, Tennessee and competed for a year-and-a-half before concussions and a torn ACL brought her competitive career to an end.

She completed her college career at the University of South Florida with a degree in Exercise Science. She currently runs a “budding personal training business,” according to Brian, while teaching Zoom fitness classes and developing female wrestlers, in the Orlando area.

Besides her judo expertise, Kelly built a reputation on the volleyball court, playing four years at George Jenkins High School in Lakeland.  She earned a four-year volleyball scholarship at Florida Tech in Melbourne, where she graduated with a bachelor’s degree in Accounting and Financial Forensics. The now 24-year old Kelly, then earned a master’s degree in Accounting from Florida Tech and is studying to become a Certified Public Accountant.  She now works at Northrup Grumman, a global aerospace and defense technology company in Melbourne.

“The Sunshine State Games was always my favorite and a highlight of the summer for our family and members of the local judo community,” Germain said. “It was an event where you were held accountable to reach a level of training to be successful.  For judo athletes, and athletes in most sports, being held accountable has carried over into the adult and professional world.”

Chris Germain had a successful two-year swimming run in the Florida Senior Games, winning four gold and a silver medal in the 2015 Games and four silver medals in the 2016 Games.

While she still keeps a swimming training regimen, her competitive career was limited to the two years at The Long Center, in Clearwater, and at the 2018 Polk Senior Games.

“She’s growing older gracefully,” said Brian. “She does a lot of swimming but doesn’t need the competition element like I do.  Sometimes, I wish I could be more like that.”

Officially retired from Judo after reconstruction of both of his knees five years ago, Brian has taken up Brazilian Jiu Jitsu and has been competing at the World Masters Brazilian Jiu Jitsu Championships, in Las Vegas, since 2015.  He has won the Master 6 Male Black Belt Heavy Gold Medal for the last three years.

“Brazilian Jiu Jitsu is like judo without the throws and falls,” German said. “It’s more focused on mat work.”

Polk County’s first family of Judo is alive and well.  The Germain’s still cling to the values that brought them plenty of Sunshine State Games success and have fond memories of Florida’s Olympic-style Sports Festival.