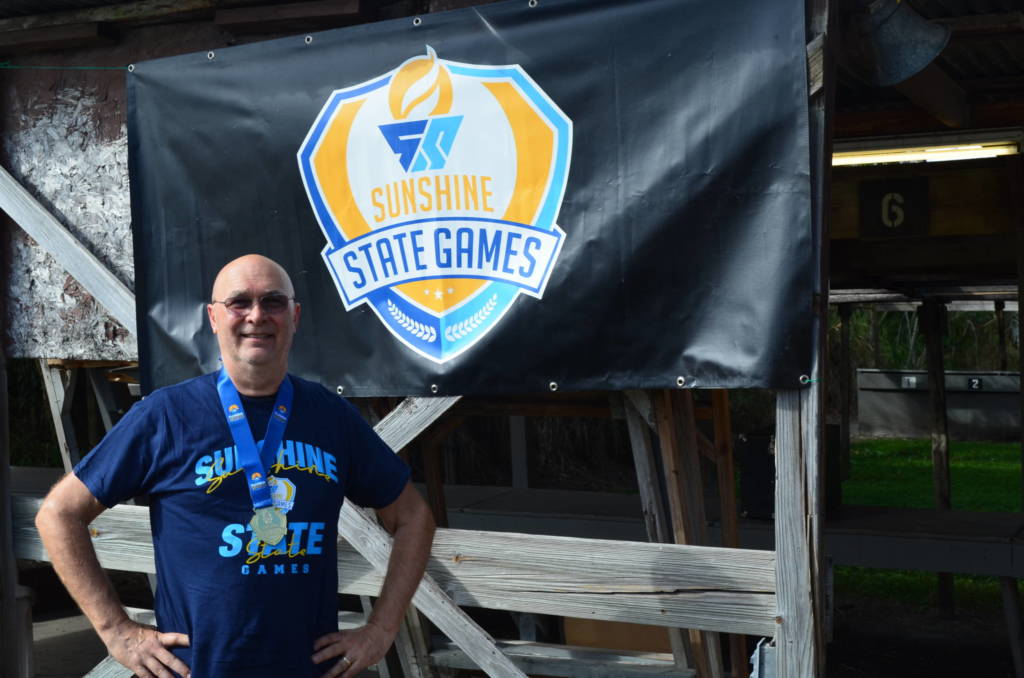 The nine competitors at the Wyoming Antelope Club, in Clearwater, fired a total of 270 shots from distances of 25 and 50 yards.  Shots are fired in time frames ranging from 10 seconds to 10 minutes.  One final thing, all shooters are required to stand and are not permitted to lean or touch anything while firing with one hand only.

It’s an effort in precision, concentration and focus.

For the last two years, Tim Goszka, has mastered those characteristics and has recorded the overall high score in the event.

Goszka tallied a score of 2528, shooting with three different pistols, a .22 caliber, center fire and a .45 caliber pistol.  His best round came in the .22 caliber, with a first-round score of 856.  He scored an 840 in center fire pistol second round and an 832 in the final .45 caliber round. His score was 35 points ahead of the next best shooter, James Hensler, and he hit the 1 ½ inch center X-ring of the target 70 times.

“I lucked out again,” Goszka said following his performance. “I’m just a regular guy who has practiced and studied the sport.  About 20 years ago, I had a pistol coach and learned good habits. If you’re going to do anything well, you have to do things correctly.”

Precision pistol shooting is an effort where the shooters have to concentrate for many hours as well has possess a degree of physical stamina.  Goszka noted that the event held on Saturday, November 1, began at 9:00 a.m. and lasted until about 2:00 p.m.

Besides his physical preparation for competition that includes yoga and weight training, he is mentally prepared as well.  He finds sport shooting competitions, “very meditative.”

“You can’t be thinking, ‘Did I file my income taxes properly,’ while you’re out there shooting,” Goszka said. “I find it very enjoyable and relaxing.”

When not honing his skills at a range in Ruskin, near his Sun City Center home, Goszka practices, “dry firing,” that involves aiming the gun at a target with no ammunition and squeezing the trigger.

“It really helps with concentration and trigger control,” he said.

While Goszka’s successes with a pistol in the Sunshine State Games are well documented, he won’t be shooting in any other of the disciplines offered in the annual Olympic-style Sports Festival.

“I’m a one-trick pony,” he said with a laugh. “It would be ugly if I was out there with a rifle or shotgun.”

Tim Goszka is quite precise in his one trick and he’s got the gold medals to back it up.