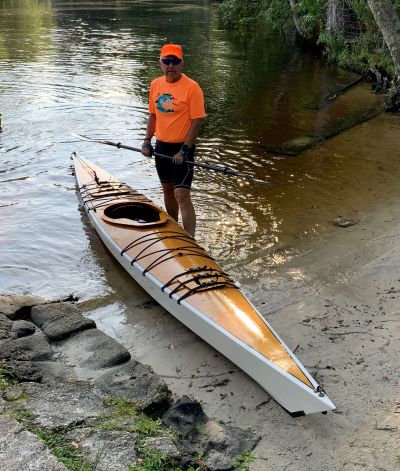 Mark Nye surveyed his collection of handmade kayaks on Saturday morning and picked one out to compete in the 2022 Sunshine State Games, presented by Amazon, Canoe Kayak Sprint Races on Black Creek, in Middleburg.

The Fleming Island kayaker lives minutes away and paddles the creek often. He turned in a time of 1:40.42 in the 200 meter sprint race, to edge Lloyd Reeves, in a competitive heat and win the gold medal in the K-1 Men’s Event, Vet 1 Division (60 and over). It was the second fastest time of all kayakers at the Middleburg Boat Ramp.

Nye, who settled in Fleming Island, after retiring from the Navy and being stationed at Cecil Field in Jacksonville, took up kayaking after towing one behind his sailboat while out in the waters of the Jacksonville area.

“At some point I began to kayak more and sail less,” he said. It’s great exercise and it sure beats running on a hot day.”

Besides his competitive paddling in Florida Competitive Paddlers Association races, the association of which he is the Vice President, Nye likes to explore the waters of Florida in his kayak.

One of his most memorable journeys was paddling from Silver Springs north to the St. John’s River. For those not in the know, the St. John’s River is an oddity since it flows south to north. He accomplished the feat over the course of the summer of 2017.

The approximately 60 mile feat was accomplished in stages using a bicycle, the kayak and his truck. Nye would leave the bike at his destination, chained to a tree, then take the kayak in his truck ,to his starting point. After paddling to the bike, he chained the kayak to the tree and rode the bike back to his truck.

“It was a good day workout,” Nye said.

His travels also bring him out of state as he competed in the U.S. Canoe Association Marathon National Championships, in August 2021, in Warren, Pennsylvania. Its wasn’t unusual for him to race in multiple races at the event, but in what boats.

As he walked to his truck to leave the Middleburg Boat Ramp, he told his fellow racers, “It’s back to the storage unit to put away the boat.”

No doubt, Mark Nye will make another selection for another day, depending on whether it’s for competition or exploring.

Canoe Kayak continues Sunday with Marathon Races, of 12 miles, at the Middleburg Boat Ramp. Also wrapping up on Sunday is Pickleball, with Mixed Doubles, at Ronnie Van Zant Memorial Park, in Green Cove Springs. The championship bracket for Ultimate at the Plantation Sports Complex in Fleming Island, and Archery comes to a close in Alachua County.