A Picture Tells A Thousand Words – A Classic Fencing Duel 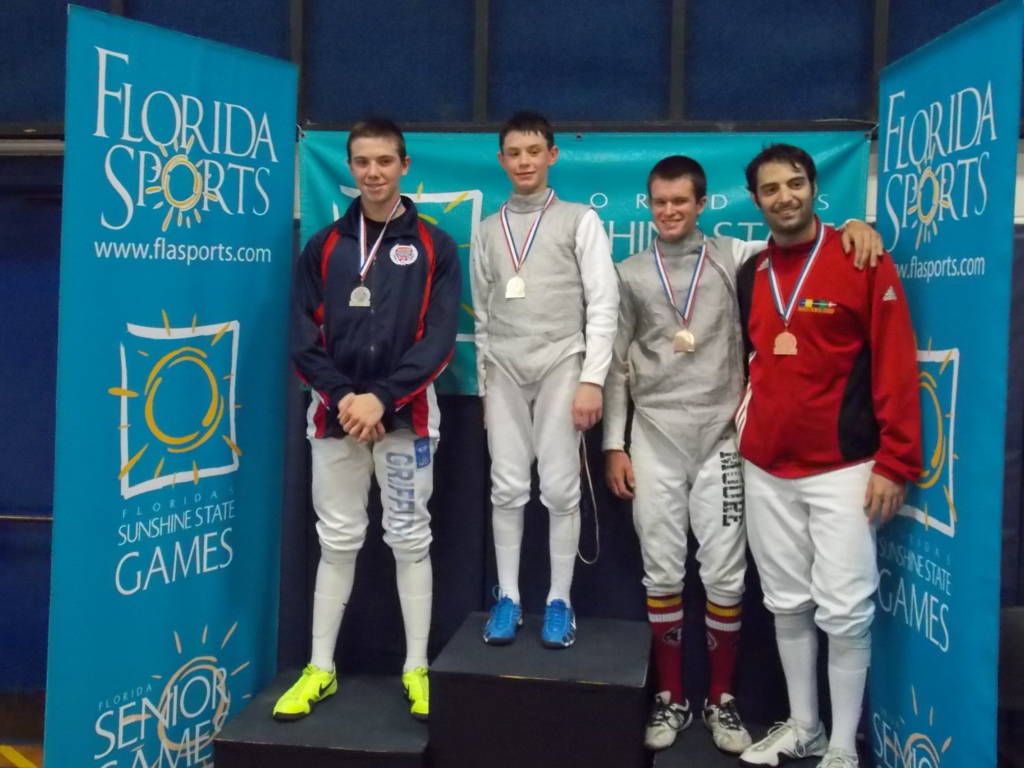 TALLAHASSEE, Fla. – It’s a moment in time captured by someone who just happens to be in the right place at the right time with a camera. The photo captures the image, but within the image, there’s a story worth being told.  At every Sunshine State Games event, there’s a story waiting to be told.  When we’re lucky, an image is captured to provide the evidence to back up the story.

In 41 years, the Sunshine State Games has seen its moments of drama, much like the one featured in this photo.

It was a scene worthy of a Hollywood soundstage, with the drama of Errol Flynn in Robin Hood or Johnny Depp in Pirates of the Caribbean. A pair of arch enemies dueling it out with swords.

In reality, it was the Santa Fe College Gymnasium, the site of the 2013 Sunshine State Games Fencing Championships, part of the Alachua County Festival, held the weekend of June 9-10.

Neither one of the dueling pair was a storybook hero or pirate, but a pair of 15-year olds in the championship match of the Men’s Foil competition. At stake was gold, but not a treasure chest full of gold coins and jewelry. The gold was a three-inch in diameter Sunshine State Games gold medal.

In a battle of teenage combatants, Justin Herman, from Plantation, defeated Jordan Griffin, from Naples, both advancing through a field of 36 fencers. The field featured fencers of all ages, who came to the event from clubs in Gainesville, Jacksonville, Lakeland, Orlando, Miami, Fort Myers, Sarasota, Tampa and Tallahassee.

A crowd of nearly 100 fellow fencers and spectators gathered around the 46-foot fencing strip to watch Herman and Griffin battle to a 14-14 tie. As the crowd moved to the edge of their seats, Herman scored the match-winning 15th point to win the championship and his 10th bout of the day over a six-and-a-half-hour period.

“I was having a really good day,” Herman said after the gold-medal winning performance.  “I really have no idea how I got through the bracket.  It was such a big day and it was the best I’ve ever fenced.”

In an earlier match in the championship bracket, Herman defeated his former coach Rafael Suarez, who was a member of the Venezuelan Olympic Fencing team.

His performance at the 2013 Sunshine State Games earned Herman the Male Athlete of the Year Award.  At 15-years old, he was attending college fencing camps and aspired to be a collegiate fencer.  “I’d like to make it to that level,” he said during the summer of 2013.

His success in the Sunshine State Games was a precursor for living up to his aspirations.

Herman is currently a member of the Boston College fencing team and completed his junior season in 2019-20.  He had a seventh-place foil finish in the New England Intercollegiate Fencing Conference Championships and also competed in the North American Cup and ACC Championships.  He was named the Northeast Conference Rookie of the Year for the 2017-18 season.

Herman began fencing in the Sunshine State Games in 2009, winning a gold medal in the Y-12 Foil event.  He continued his success, winning six medals between 2009 and 2017.  He and Griffin met again in the Men’s Foil Championship bout in 2016, with Griffin winning the gold medal.

Fencing is an original sport of the Sunshine State Games dating back to 1980. The 2013 Fencing Championships featured 247 athletes in action, the third highest total in the history of the Games.