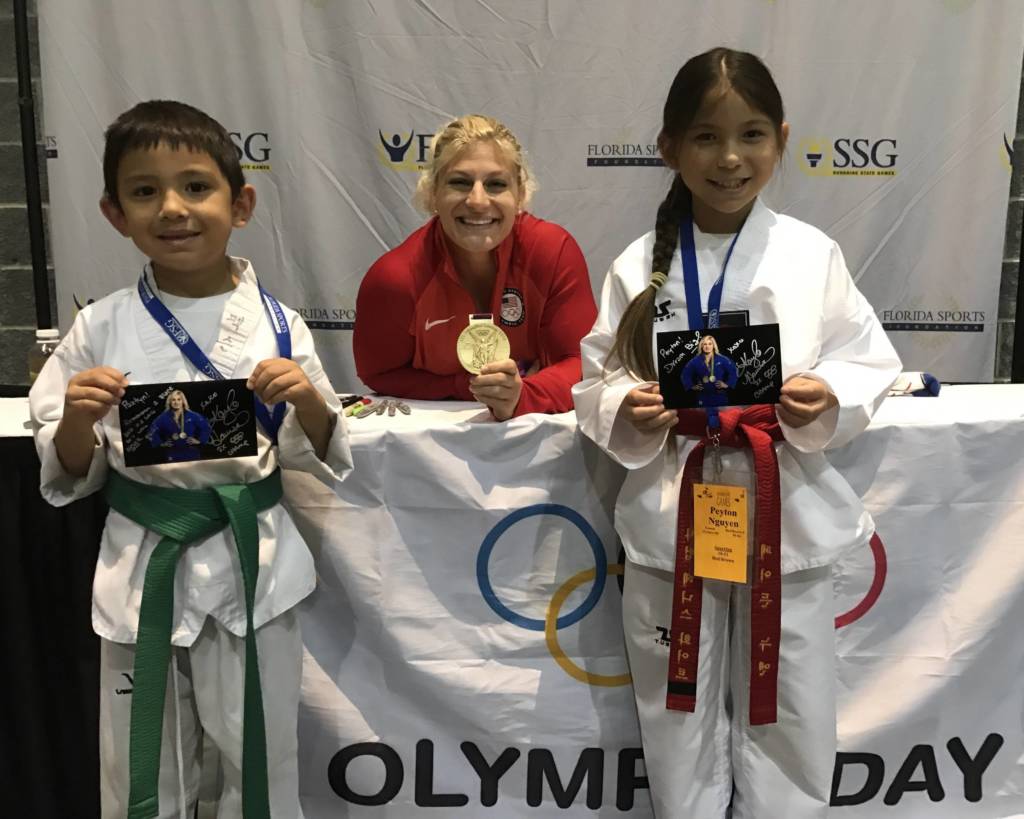 Johnson returned to the goal for the Women’s Open Riptides team, playing with a group of players she advanced through the age groups with as they all grew up in the pool.

“Ashleigh Johnson, our hometown girl and forever a Riptide, has won gold and captured the hearts of the world in her journey,” said Riptides head coach Carroll Vaughan prior to the 2017 Games. “We are so proud of Ashleigh and all of her accomplishments. She’s come a long way from starting at Cutler Ridge pool with us.”

One of the goals of the Sunshine State Games, during its 40 years of providing amateur sports opportunities for Floridians, is to offer an outlet for athletes the first level of competition against athletes from within the state as they move on to the ranks of national and international competition.

The journey of Ashleigh Johnson is one the Sunshine State Games has provided many Florida amateur athletes.  She began playing on the local club level against other Florida athletes in the Sunshine State Games and advanced to play at Princeton. By that time, she caught the eye of the U.S. National team coaches and continued on the international level until eventually taking the sport’s largest stage in London.

Many athletes like Johnson, Jennifer Rodriguez, and Ato Hand advance to a U.S. National Team to play against international competition and finally in the Olympic Games.  David Ross’s journey to Major League Baseball also started in the Games.

When athletes like these return to their roots, they provided an inspiration to all Sunshine State Games athletes who go to sleep at night dreaming of their sport of choice.

Miami native, Jennifer Rodriguez returned to the 2006 Sunshine State Games, in Miami, calling the Games the place where she first honed her athletic skills. She competed from 1983-1987 and 1990-1992, as a medal-winning in-line roller speedskater. She was seven years old for the 1983 Sunshine State Games.

“I was a little girl when I initially competed at the Games,” Rodriguez said.  “I remember it was always a big event when I competed.  I always looked forward to meeting people from around Florida.” Rodriguez said the Games provided her with valuable experience as an athlete that helped her on her path.  “In any competition, the more you participate, the more experience you gain,” she said.  “I believe my participation in the Games properly prepared me for my future athletic endeavors.

Rodriguez parlayed her experience from the Sunshine State Games to the 1993 In-Line Speedskating Championship.  She learned to ice skate in just three months in 1996 and made the US National team.  Rodriguez, who competed in both the 1998, 2006 and 2010 Winter Olympics, was inducted into the U.S. Speedskating Hall of Fame in 2019.

“The Sunshine State Games were an experience I’ll never forget,” Rodriguez said.  “I look at them as a good steppingstone to the national level.”

David Ross wanted to be at the 25th Anniversary of Florida’s Sunshine State Games in Tallahassee.  After all, he’s a native of the city and rose through the ranks of youth baseball in Florida’s Capital City. Problem was, at age 27 his rise through the ranks found him at the top of his game.  So instead of pitching in to help in some way at the 2004 Sunshine State Games, he was suiting up for the Los Angeles Dodgers, on the way to become a two-time World Series winner with the Boston Red Sox and Chicago Cubs.

From the fields of Tallahassee to the legendary fields of Dodger Stadium, Fenway Park and Wrigley Field, David Ross’s rise followed the regular path.  He played Little and Junior Major League in City of Tallahassee parks, played Babe Ruth League baseball locally and four years at Tallahassee’s Florida High School.  He continued his career playing collegiately at Auburn and the University of Florida.

Ross was a seventh-round pick by the Dodgers in the 1998 Major League draft and made minor league stops in Jacksonville and Las Vegas before his Major League debut in June 2002.  During his 16-year playing career, Ross also made stops with the Pittsburgh Pirates, San Diego Padres, Cincinnati Reds, Atlanta Braves, Red Sox and Cubs.

Now the manager of the Cubs, after his retirement from the field, it was the lessons he learned in his youth that benefitted him in the Major League.

“My youth league baseball helped tremendously,” Ross said.  “I can name plenty of names I played with when I was 15, 16 and 17 years old that played in the major leagues.  It’s a learning experience that helps you grow up.  You’re learning the culture of baseball, getting used to traveling and establishing work habits.  You also get to see just how good other players are as well.”

“Someone found out that I was on a USA Baseball Junior team that won a gold medal, and they asked me if I would do it.  I even wore my Team USA uniform.”

Another Tallahassee native, Ato Hand, began his Olympic journey to the 2000 Games in Sydney in the Sunshine State Games.  After he left the mat, Hand returned to the Games as an official and also to serve as an inspiration to young Judoka.

Hand has been a fixture at the medal stand passing out awards and offering congratulations to athletes and posing for photos with them during their moment in the spotlight.

She gave an inspirational message about her younger days of competing to the 175 judo athletes at the opening ceremony, with a focus on the younger competitors. “Sometimes we lose and it’s going to be hard.  But every day you can be motivated and disciplined. A black belt is just a white belt that never quits.”

At the 2005 Games in Fort Lauderdale, Miami native, and at the time a member of the Florida Marlins staff, Andre Dawson paid a visit to players at Nova Southeastern University.

Many of the high-school aged players were unaware of the Dawson’s career that included a National League MVP Award, numerous All-Star Games appearances, and a selection to the National Baseball Hall of Fame in 2010.  The coaching staffs, however, were well aware of “The Hawk’s,” talent and were very appreciative of the on-the-field messages he relayed to the players.

Jake Kaminski, of Gainesville, made a Sunshine State Games stop, in between his two Olympic Games appearances in 2012 and 2016. During the 2015 Games in Sarasota, Kaminski, shot a 664 in the Adult Male Olympic Recurve division 720 round from 70 meters at a 122 centimeter face.  Two days prior to the Games, he was at an International competition in Turkey.