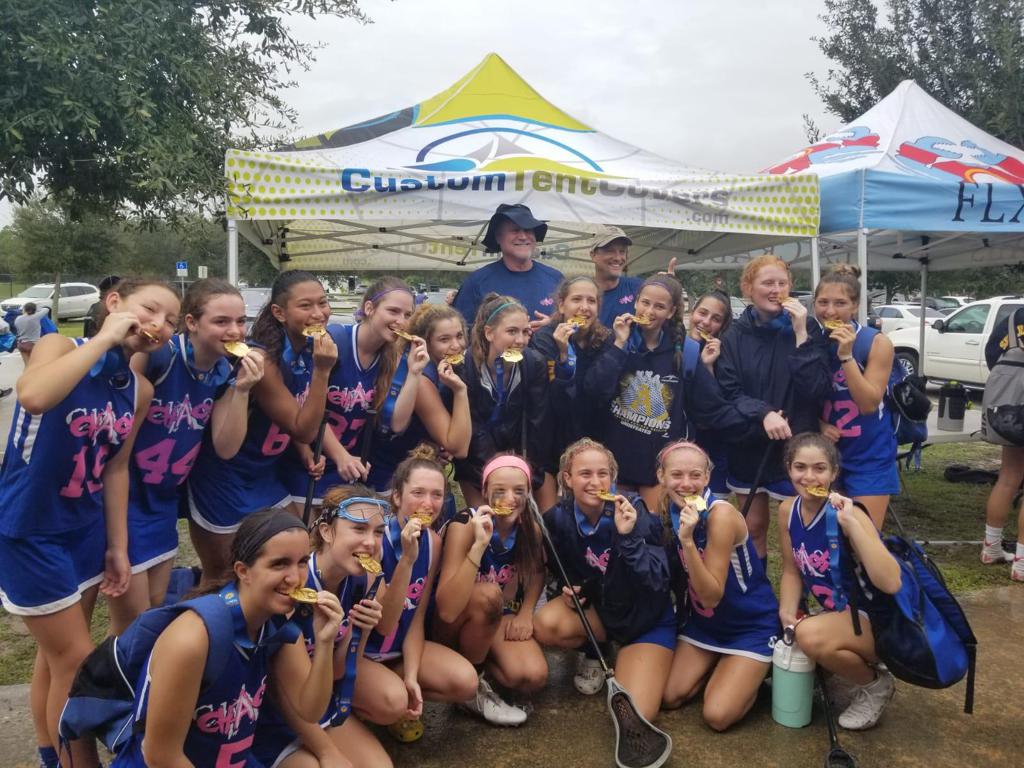 The annual Fall Classic wrapped things up on Sunday afternoon as Tropical Storm ETA was approaching and made for wet conditions, according to tournament director, Bo Lamon.

The gold-medal winning performance for the Vero Beach-based Dukes Florida team, made for a busy weekend for several players on the team.

The Dukes were undefeated in five games and defeated the FLX team, 9-0, in the championship game. FLX was made up of players from the Fort Lauderdale St. Thomas Aquinas High School team, according to the Dukes Founder and Team Director, Rip Pratt.

“We’re very proud of the fact was have players from all local high schools,” Pratt said. “We’re in a small market here in Vero Beach and having players from all schools makes the team more competitive.”

Four members of the team are also members of the St. Edwards Pirates football team and played a game against Master’s Academy, in Oviedo, Friday night.  Quarterback Brennan Wolfe, Danny Richmond, Grayson Falk and Major Croom played in the 28-13 loss on Friday night in the 2020 Florida Sunshine State Playoffs and were on the field for the Duke’s first game Saturday at 3:00 p.m.

“Brennan Wolfe even took the SAT on Saturday morning before playing in the tournament,” Pratt said. “He’s a real leader on the team defense.”

Richmond was the co-captain of the 2020-21 St. Edwards lacrosse team and committed to play for Florida Tech in Melbourne.  He has also been accepted into the Electrical Engineering program. He is a wide receiver for the Pirates football team.

In the Dukes five wins, they allowed only six goals, the lowest number allowed of the 51 teams in the tournament.

Creator’s Game won the High School B division with a strong defensive effort while fighting off injuries throughout the weekend.  The Palm Beach County-based team defeated the Sea Dogs 2024 team 6-3 in the championship game, allowing the most points of the five games they played.

“We had a rock-solid defense effort in the tournament,” said Pearse Brolly, head coach of the team featuring players from The Benjamin School, Jupiter Christian, Wellington, Jupiter, William T. Dwyer and Suncoast High Schools. “We were using a new goalie in Jareth Buccilli, who was stellar. We had a player injured and out for the rest of the tournament and we had a player who couldn’t play on Sunday because he wasn’t feeling well. “

The Creator’s Game program had several other teams competing in the Fall Classic, including a silver-medal winning Girl’s Middle School team.  Creator’s Game is an urban program to introduce youth in underprivileged areas that wouldn’t otherwise have the opportunity to play the sport, according to Coach Prolly.

In the Girl’s High School B Division, the Chaos Blue team was undefeated in three games of the championship bracket after finishing with one win and two losses in pool play.

Chaos Blue scored 13 goals against 18 allowed on Saturday in pool play.  They came back on Sunday to win three games by a combined six goals, in three consecutive games within a span of three hours, between 10:30 a.m. and 1:30 p.m.

Chaos is an all-girls Lacrosse club established in 2015.  It consists of players from all over South Florida.