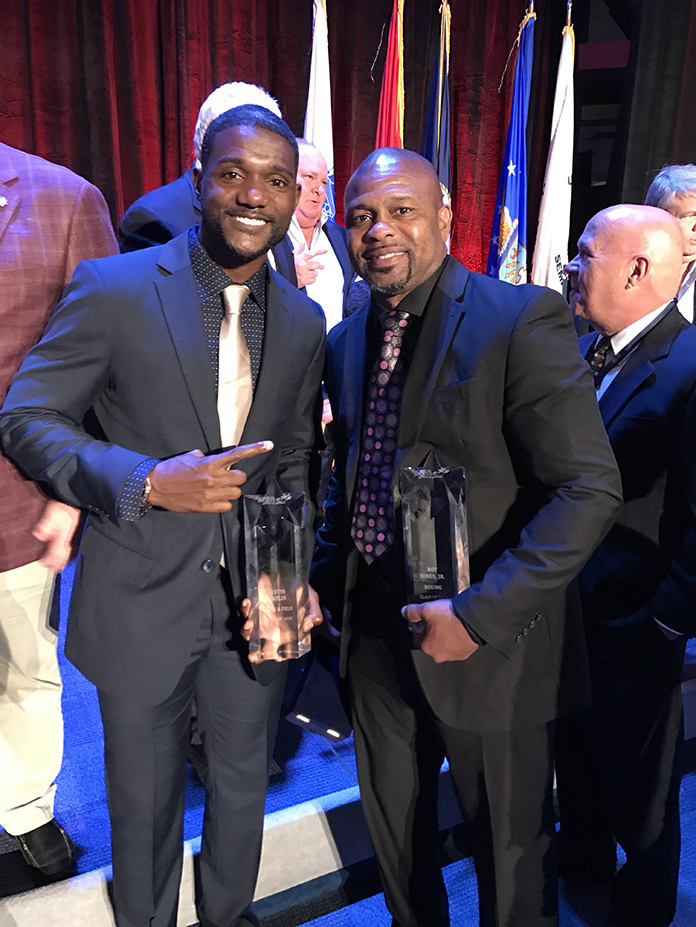 TALLAHASSEE, Fla. – Now entering its fifth decade, the Sunshine State Games, Florida’s only Olympic-style Sports Festival, has provided a steppingstone from local competitions to a statewide stage for amateur athletes to improve their skills.

The 2018 Florida Sports Hall of Fame Induction Ceremony, at the National Naval Aviation Museum on Pensacola Naval Air Station, showcased two athletes, who at a young age, ventured out of their Northwest Florida comfort zone and into statewide competition.

Roy Jones, Jr. and Justin Gatlin were inducted into the Florida Sports Hall of Fame on November 7, 2018, in front of the friends and family who watched their journey that began in Pensacola area gyms and tracks.  They traveled to Gainesville and Kissimmee for Sunshine State Games competitions.

After venturing out of the borders of the Florida peninsula, both climbed atop medal stands at the Olympic Games representing the United States, the State of Florida and dozens of family members, friends and coaches who supported them along the way.

From the O’Connell Center ring in Gainesville, Jones’ travels led him to the 1984 U.S. National Junior Olympics and the 1986 and 1987 National Golden Gloves Tournament.  In the 1988 Olympic Games in Seoul, South Korea, he earned one of the most controversial silver medals in the history of the Olympic Games.

“We’re a very small community,” Jones said about Pensacola during his induction speech. “When I first started boxing, people would always tell me I couldn’t make it being from Pensacola, Florida. That struck a nerve in my body.

As I grew up and started going places, to national tournaments, like the Golden Gloves, there would be 25 guys from St. Louis, one guy from Pensacola, 13 guys from New York. I was always by myself. But one thing they all knew: you fight that guy from Pensacola, you gonna have your hands full.”

In his professional career, Jones won over 60 bouts during n  a 19-year career. He is one of the most decorated boxers of all time, winning championships in four different weight classes, including titles in the middleweight, super middleweight. Light heavyweight and heavyweight divisions.

His professional career began on May 6, 1989, and ended on February 8, 2018, with bouts held in Pensacola. He compiled a 66-9 record between the two matches on his home turf.

Justin Gatlin, competing as a 16-year old from Pensacola’s Woodham High School in the 1998 Sunshine State Games at Poinciana High School, won a 110 Meter Hurdles gold medal in the Intermediate Boys Division with a time of 14.42. After graduating from high school two years later, Gatlin won six NCAA titles as a member of the University of Tennessee track team.

From his teenage years and into his 30’s Gatlin was at the starting line against top athletes from around the world. He was unbeaten in the 200-meter dash in competitions from May 18, 2013 to July 7, 2016.

At the 2018 Florida Sports Hall of Fame Induction Ceremony, Gatlin was introduced to Florida Senior Games champion sprinter, John Hurd, of Navarre, who also knows a thing or two about running an unbeaten string of races.

Despite an age difference of 50 years, the two Pensacola sprinters, Gatlin and Hurd, shared competition and preparation tips, proving an athlete is an athlete, no matter what age group they compete.

Roy Jones, Jr. and Justin Gatlin are just two athletes who have taken the step outside of their hometowns to the various communities to host Sunshine State Games events over the years.  The State of Florida’s Olympic-style Sports Festival is the longest continually running State Games in the United States.  For 40 years, it has provided Florida’s finest amateur athletes the opportunity to compete in a variety of sports and events.