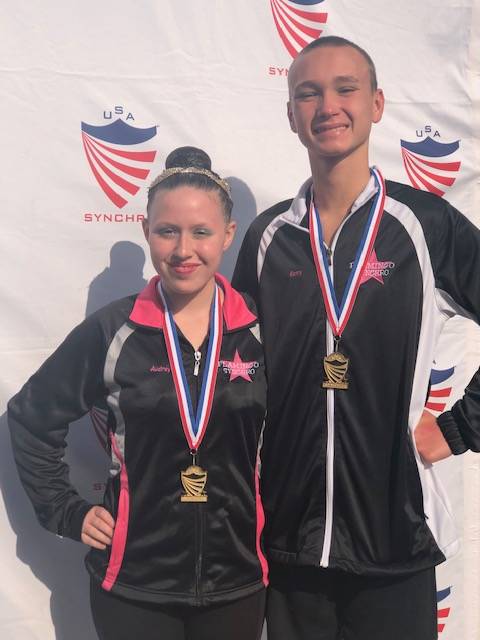 TALLAHASSEE, Fla. – A member of the Lakeland YMCA Flamingos Synchronized Swimming team is contributing to an historic movement within the sport.

Fifteen-year-old Kenny Gaudet has been a member of the team since he joined the Novice program when he was five.  Having advanced to the competitive team, Gaudet has been identified as a top Mixed Duet athlete, as the sport progresses with an effort to include more male athletes.

Within the last few years, U.S. Synchro, now known as U.S. Artistic Swimming on a National level, is following the lead of the International Governing Body, FINA, and including Mixed Duet in its competitions.

The event is being considered for debut in the 2024 Olympic Games and in the upcoming Sunshine State Games and U.S. National Calendar events.

The event involves a male and female athlete competing in a duet that is specifically choreographed to showcase the juxtaposition of the two athletes, according to Sunshine State Games synchronized swimming sport director, Lorraine Valerino, and Gaudet’s coach with the Lakeland YMCA Flamingos.

“There are specific elements required within the judging of the event to showcase the strengths of the male athlete,” said Valerino.

To further his skills in the event, Gaudet traveled to California for a week of training with U.S. Artistic Swimming National Team in January.  There he followed a six-day regimen of workouts from 7:00 a.m. until 2:00 p.m. with training on land and in the pool.

“It was an opportunity to show what it would be like if I was on the National team,” Gaudet said. “It wasn’t what I was used to, but it helped me become stronger.”

Gaudet and his Flaimingo’s partner Astrid Ericson received training as a team at a clinic in Las Vegas in February.   The clinic was also an opportunity to promote further recruitment of male athletes to the sport.

Gaudet and Ericson worked with Bill May, the first male athlete to win a Synchronized Swimming gold medal at a major event.  He paired with Christina Jones, to win a mixed duet gold at the 2015 World Aquatic Championships in Kazan, Russia.

The Lakeland duet spent three days working with May, and his current mixed duet partner and coach, Chris Carver.

“We mainly focused on the mixed duet artistic side of the competition and the compatibility of the male and female working together,” Gaudet said.

Gaudet has been competing in Sunshine State Games Synchronized Swimming since 2012 and has teamed with Ericson or Audrey Frey for the last few years. He was named the SwimOutlet.com Athlete of the Month for September 2017.

He and Frey won the 13-to-15-year-old Mixed Duet gold medal at the 2019 USA Synchro Junior Olympic Nationals in Tonawanda, N.Y., last July after the Sunshine State Games. Their win was a significant accomplishment since their routine was choreographed within three weeks of the competition, according to Valerino.

“Their opponents from Minnesota had been practicing together for a year,” Valerino said.  “It was a very close finish, but they won.”

Now with 10 years of experience under his belt in the sport, Gaudet has approached the next level, working out with the U.S. National Team.  It is a step on the way to an Olympic dream that began when he first began in the sport of Synchronized Swimming.

“My goal to make the National team became more of a reality two years ago when they started to identify boys for the mixed duet events,” he said. “Now with the 2024 Olympic Games looking to add Mixed Duet, that’s becoming more of a reality as well.”

His travels to Synchronized Swimming events have increased from meets around the State of Florida with the Lakeland YMCA Flamingos to national events in New York, the San Francisco Bay Area, Las Vegas and San Antonio.

With the support he and Ericson are receiving from the Flamingos and the Synchro community, they may want to start looking into a passport.