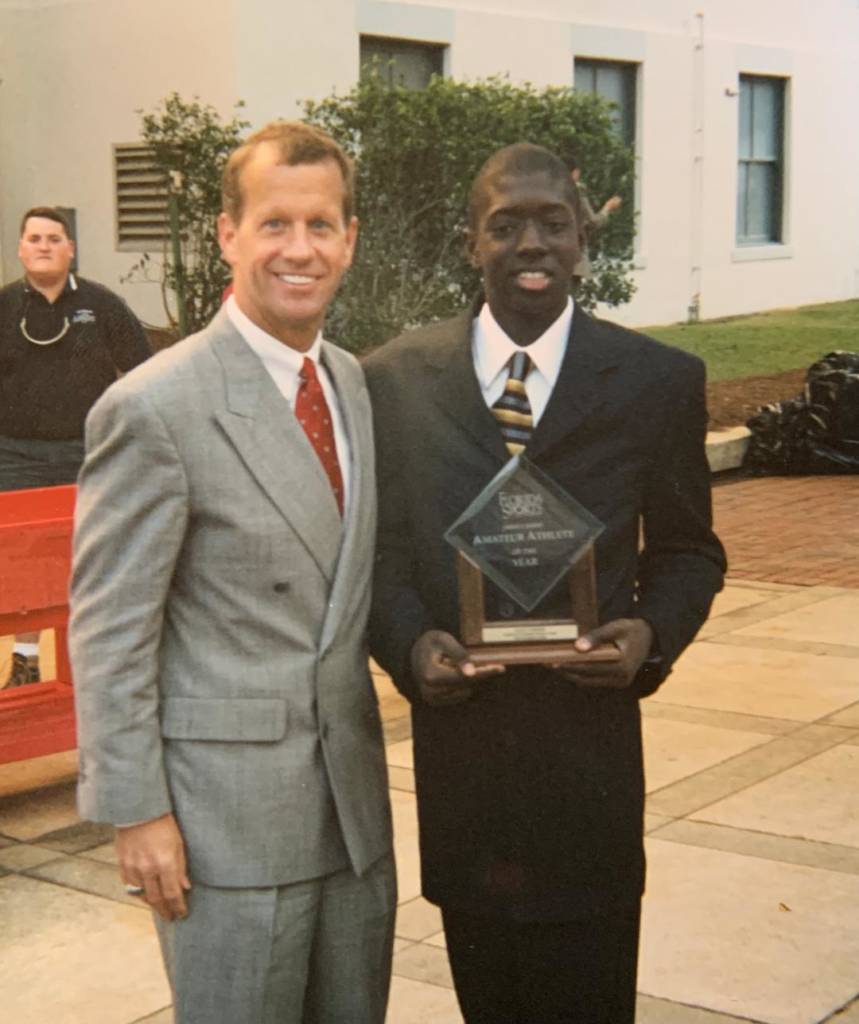 Alex Forbes stood out on the 2021 Sunshine State Games Swimming Heat Sheets, not only because of the times listing him in the fastest lanes of the final heats, but the number in the age column.

At 33 years old, Forbes was returning to the Sunshine State Games starting blocks for the first time since 2001.

When the 2001 Sunshine State Games were held in his hometown of Orlando, Forbes was the returning Male Athlete of the Year, having earned the honor at the 2000 Games in Gainesville. Swimming in the 11-12 year old age group, Forbes won eight gold medals.

After being named the Sunshine State Games Athlete of the Year, Forbes was honored at the Florida Capitol at a Sports in Florida Day event, where he was presented the award by then-Lieutenant Governor, Frank Brogan. He was a State Champion swimmer for Lyman High School and earned a scholarship to swim at the University of Kentucky, where he earned a degree in Psychology.

He returned back to the Central Florida area after college and now lives in Apopka and works as a personal trainer.

In his return to Gainesville in 2021, at the Dwight H. Hunter Northeast Pool, Forbes won three gold medals, in the 50 and 100-meter freestyle and the 100 meter butterfly. In the two freestyle events, his times were better as a buff thirty-something than a skinny teenager. He also posted the only 100 butterfly time under one minute of 35 swimmers the event.

His 2021 visit to the Sunshine State Games came for different reasons than in his teen years.

He was swimming to honor the memory of his father and former coach, Al Forbes, who passed away in March 2020. The 2021 Games were also giving him a chance to earn a qualifying time to be a member of the St. Vincent and the Grenadines Olympic Swim Team.

“Why not try and honor him, and continue on his legacy by representing his country, at the highest level,” Forbes said. “Why not use the Sunshine State Games again, to further another stepping stone along the way to try and get times for the 2021 Olympic Games.”

Following his Sunshine State Games performance, Forbes followed up with an ever better time in the 50 meter freestyle. Three weeks later, at the South Lake Aquatic Club’s “Last Chance to Dance,” meet on June 26-27, his time of 24.38 was .67 of a second faster.

Even with the impressive June performances, it wasn’t enough to earn a spot on the St. Vincent and the Grenadines Olympic team. An appearance at the FINA World Championships, swimming for the St. Vincent and the Grenadines would have helped Forbes’ attempt at the 2020 Olympic Games, according to South Lake Aquatic Club Head Age Group Coach, Alex Baxter.

The 2021 FINA World Championships will be a step toward the 2024 Olympic Games in Paris, France. As of now, Forbes is unsure the steps he needs to take.

“Everyone is in Olympics mode right now,” he said. “Once the Games are complete, I’ll start making contacts to find out what I need to do.”

Until then, he will continue working out with the South Lake Aquatic Club, where he is coached by Don Gibb, who was an assistant coach at Kentucky during Forbes’ time at the university.

Maybe those impressive times will appear in another Sunshine State Games heat sheet, with another year added in the age column.