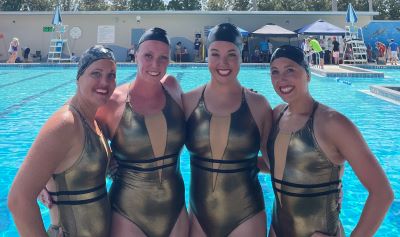 In recognition of the 50th Anniversary of the passing of Title IX, in June, 1972, the Sunshine State Games salutes the coaches of the Gainesville Gaviatas Artistic Swim Team, who all continued their artistic swimming ventures while attending college.

Head Coach Crystal Motes and coaches Katy Alexander, Sarah Cooke and Grace Downey, all participated in the Sunshine State Games in their youth and competed in the 2022 Games, in a Open Division Team Routine. Also joining the team was Caroline Pridgen.

It’s safe to say, the Gaviatas coaches have made a difference in the Florida Artistic Swimming community and continue to lead by example.

“It worked out well because I could continue to swim and focus on academics,” said Alexander, who majored in Chemistry at Richmond and earned a Master’s Degree in physician’s assistant studies at Wake Forest. “There were programs for both at Richmond.”

Growing up in the Tampa Bay area and swimming for the Suncoast Waterworks team, Crystal Motes always wanted to attend the University of Florida. She swam in competitions at the pool where she now serves as the head coach of the Gaviatas.

“It was a bonus they had a synchro program at UF,” said Motes, who earned a bachelor’s degree in Psychology and Health Science and a master’s degree in Occupational Therapy. “Even as a club team, we competed against varsity teams at the collegiate national tournaments and did well. We were always the number one club team.”

The quartet of former Sunshine State Games artistic swimmers are in their first year of coaching the Gaviatas and Alexander admits it’s a challenge.

“We’re making a lot of changes, hopefully for the good,” she said. “We upped the choreography and a lot of other new things. We’re trying to build cohesion and confidence while instilling discipline and hard work at the same time.”

The 2022 Sunshine State Games, presented by Amazon, seemed to show the hard work is paying off as the 20 Junior Olympic members of the team combined to earn the annual Mary Rose High Point Award in that division.

“They did great,” Motes said. “All three team routines won the gold medal and we won two golds in duets and solos.”

To wrap up the weekend of Artistic Swimming at the Gandy Pool in Lakeland, the coaching staff dove into the water themselves and continued their own Sunshine State Games success, winning an Open Division Team gold medal.

Even though they’re spending more time on the pool deck coaching these days, it all came back to them once they hit the water, Motes said.

“It was like riding a bike,” she said. “I was impressed how quickly things came together. We developed the routine about a month ago at the regional tournament in Stuart and practiced it once before we got to Lakeland.”

Hopefully, the stories and experiences of the coaching staff will motivate current Sunshine State Games artistic swimmers to continue their endeavors in the pool.