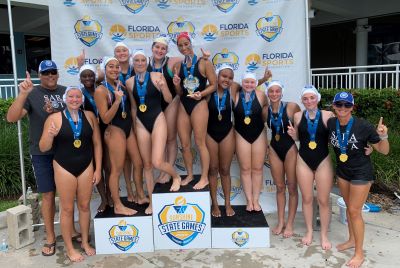 To wrap up the final weekend of Sunshine State Games, presented by Amazon, events during the month of June, 50 Water Polo teams, played more than 100 games, over the course of 35 hours between Friday and Sunday at the Coral Springs Aquatic Center and Boca Raton High School.

The 35 hours included only two hours of a weather delay on Saturday. Also included in the weekend’s activities were Fencing in Alachua County and Powerlifting, also in Broward County.

Championship Sunday brought out the best in the eight Water Polo gold medal games. After two days of pool play, with sometimes lopsided scores, the championship games were decided by an average of four points.

After having a shot blocked to give Sarasota a would be, two-point lead, South Florida got the ball with :05 remaining. Once the referee threw the ball into the pool, South Florida took a potential game-tying shot from the middle of the pool that was blocked by Sarasota goalie, Sophie Raquel as time expired.

“I could read the shot that was coming,” said Raquel. “So I knew what was going to happen and got the block.”

Since February, 19 Sunshine State Games, presented by Amazon, sports have been contested, in 14 different Florida cities, with nearly 7,000 of Florida’s Finest Amateur Athletes in action. For results of all of the sports, visit www.sunshinestategames.com/results.