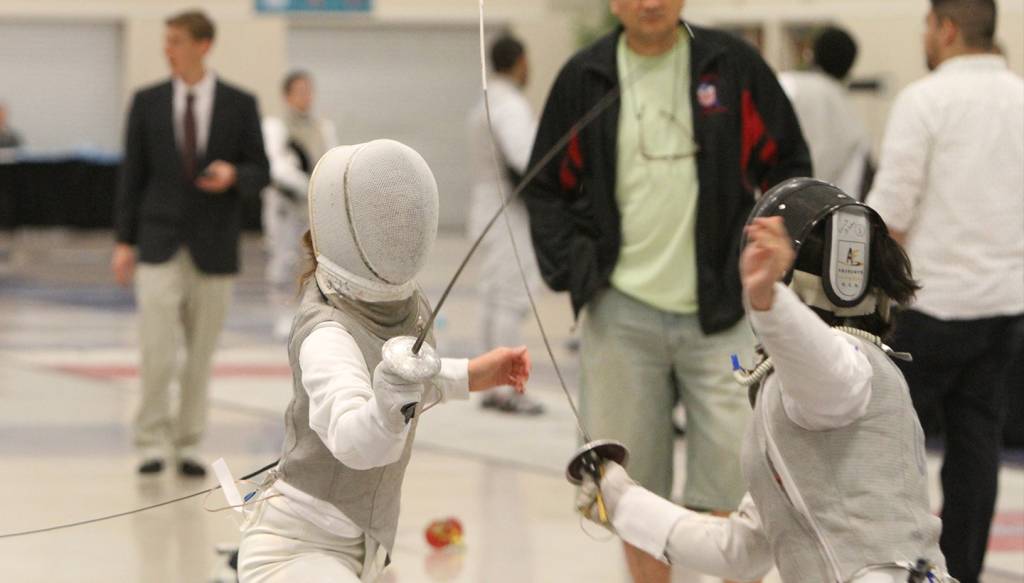 The Sunshine State Games returns to its birthplace this weekend for two weekends of events. Two of the original sports of the Games, that debuted in 1980, Fencing and Swimming, will be held in Alachua County, Friday through Sunday.

15 teams and over 400 swimmers will be in the water at the Dwight Hunter Northeast Pool beginning Friday. Over 100 Fencers will be parrying and thrusting at the Legacy Park Multipurpose Center in Alachua.

Swimming begins Friday evening at 5:30 p.m. with four events. On Saturday, 52 events will be contested beginning at 8:00 a.m. and the meet concludes on Sunday with 48 events beginning at 8:00 a.m. Age groups begin at 10 and under and advance to the Boy’s and Girl’s Divisions that include adult swimmers. Five-year old Jacob Motes, of the Makos Aquatic Club Gainesville is the youngest among all swimmers.

Among the athletes to be found diving off the starting blocks include the 2000 Sunshine State Games Male Athlete of the Year, Alex Forbes, swimming for the South Lake Aquatic Club. Forbes, now 33 years old, swam on the collegiate level for the University of Kentucky.

He was a state champion swimmer at Lyman High School in Orlando, earned All-America honors at Kentucky and Competed in the 50 free at the 2008 U.S. Olympic Team Trials.

Forbes will compete in the 50 freestyle and 100 butterfly on Saturday and the 100 freestyle on Sunday.

Swimming for the Gator Swim Club is Marcella Rupert-Gomez, who earned Class 2A Swimmer of the Year honors at Miami’s Gulliver Prep High School.in 2017 and swam for Harvard University in 2018

Two days of Fencing begins at the Legacy Park Multipurpose Center with matches beginning at 8:00 a.m., Saturday and Sunday.

One of the largest fields of the three disciplines of Fencing, the Men’s Open Epee Division features over 20 athletes registered to compete. Among those on the strip for that event include Bryce and Jake Thayer, a pair of brothers from Port Charlotte, who are long-time competitors in the Sunshine State Games.

Jake, 21, is currently on the Fencing team roster at the University of the Incarnate Word, located in San Antonio, Texas, and qualified for the 2020-21 NCAA Championships as a junior. He won the Senior Men’s Foil and Senior Men’s Sabre gold medals at the 2019 Sunshine State Games Fencing Championships.

Bryce, now 15, has been Fencing in the Sunshine State Games since 2015 when he began in the 10 and under groups.