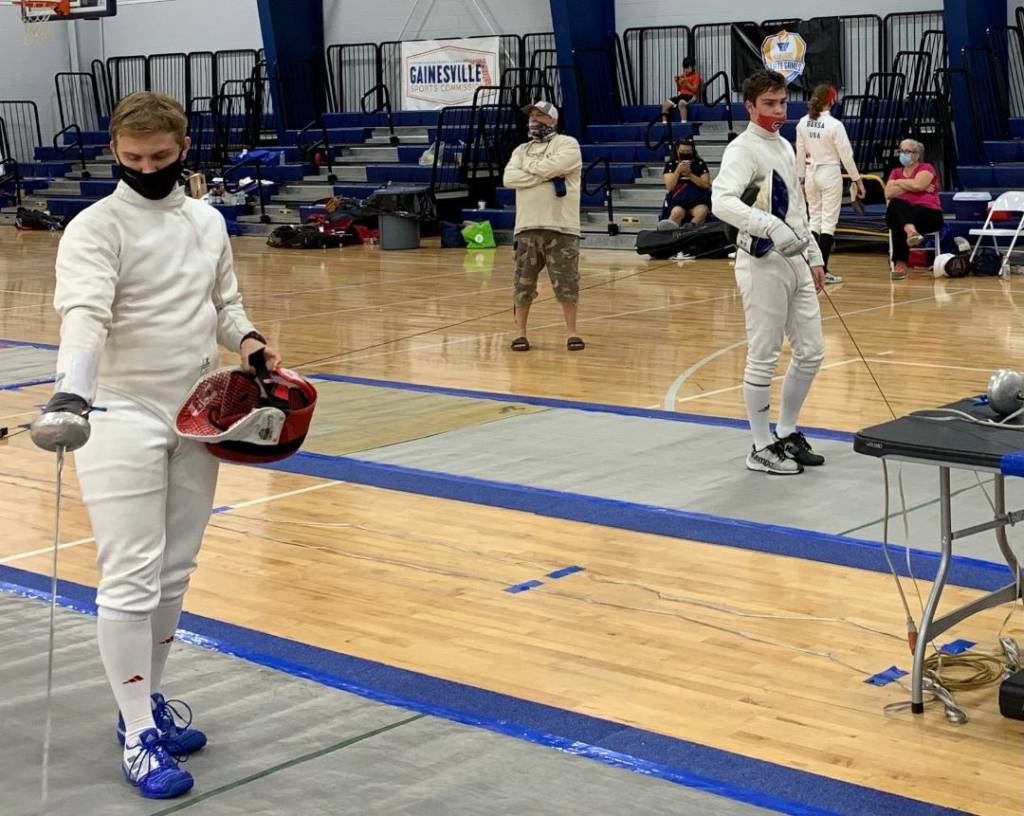 A student athlete at the University of the Incarnate Word, Thayer (left in photo) left San Antonio early Friday morning for Richmond and the North American Cup (NAC) Fencing event. He competed Saturday in the Division 1 Foil competition in a group of 180 fencers, finishing among the top 100. More than 1,500 fencers from throughout the United States were in Richmond to compete.

He left Richmond, had a transfer in Charlotte, and arrived at the Gainesville airport around 10:00 p.m., Saturday night.

He and his brother, Bryce (right in photo), now 15, from Port Charlotte, have been fencing in the Games since 2014. The brothers were a few points from meeting in the Men’s Epee finals, as they both advanced to the semifinals. Jake defeated Demerio Steele, of the Miami Lakes Fencing Club, 15-9. Bryce came up short against the eventual gold medal winner, Jeremy Moore, of Maclenny, 15-13.

“I don’t know who I would have rooted for if they were both in the finals,” said the proud Thayer mom. “They’re both so competitive, especially against each other.

In the final Moore topped Thayer 15-11, with Moore scoring the final four points of the match after it reached an 11-11 tie.

“It was a combination of my footwork and distance that gave me better techniques all together,” said Moore about his final advance to 15 points and the gold medal. “I found flaws in his approach and he overstepped a few times that led to quick points for me at the end.”

Thayer rebounded from the loss and returned to the strip to win the Senior Men’s Saber gold medal.

Wrapping up two days of swimming at the Dwight H. Hunter Northeast Pool, Gainesville’s Gator Swim Club amassed 1,320 points over three days and 105 events to win the 2021 Team Championship from among the 15 teams participating.

The Gator Swim Club also had four of the eight age group High Individual Point Scorers. Nicholas Caruso and Camille DeBoer, both members of the Gator Swim Club, won the Boy’s and Girl’s High Point Trophy with 52 and 44 points, respectively.

Peyton Brooks, of Makos Aquatic Club, tallied 52 points, the most among the 11-12 year old girls and Samuel Ospina, of the Gator Swim Club had 54 points for the high among 11-12 year old boys.

In the 10 and Under Group, Maya Syzlkowski, of the Central Florida Marlins led the way and Davin Mathis, of the St. Cloud Aquatic Team was the individual leader. Each had 54 points.