Sunshine State Games on the Range, on the Lanes and on the Course 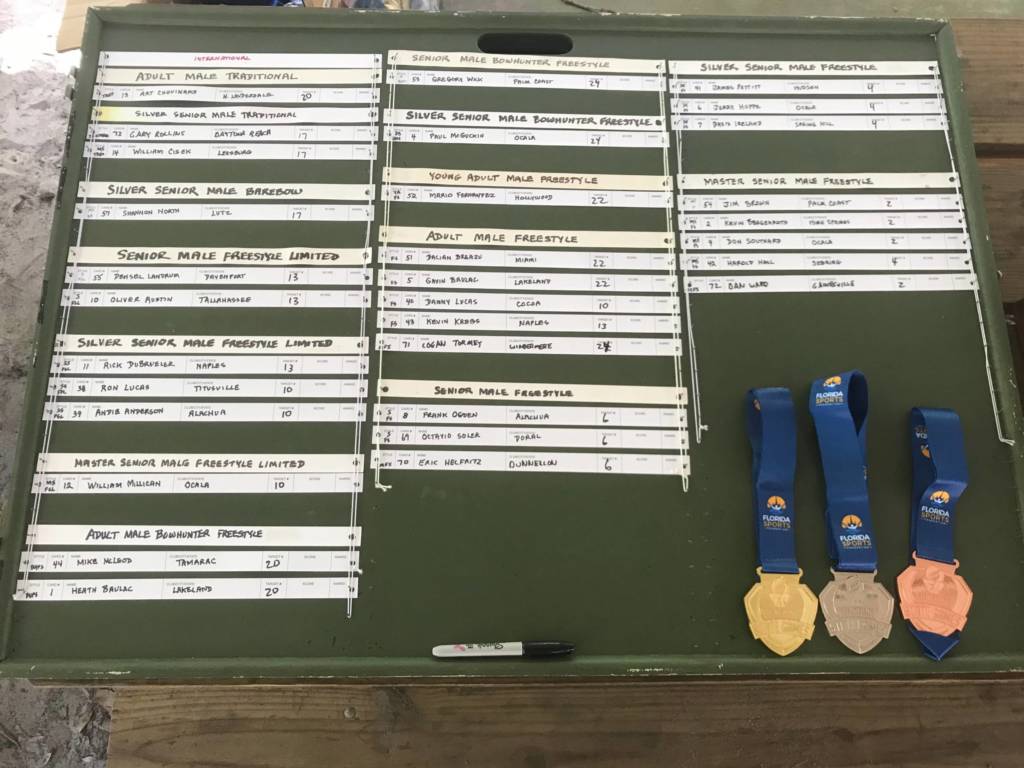 TALLAHASSEE, Fla. – A Sunshine State Games original sport (archery), one that has not been contested in 14 years (bowling) and a new entry sport to the annual Olympic-style Sports Festival (footgolf) closed out the month of July and opened up the month of August.

A total of 100 archers, ranging in age from 10-year old Sophia Drewke, from Palm Harbor, to 85-year old Anna Hartman, of The Villages, were in competition both days in the two locations.

Dunnellon’s Eric Helfritz posted the overall high score at the International Round, with a 286 of a possible 300, on Saturday at Gator Bowman.  His score of 858 was also the overall best of the 900 round at the Easton Newberry Archery Center on Sunday.

His International Round score set a record in the Senior (55+) Male Freestyle Division and was the second-best score in the history of the Sunshine State Games, three points shy of the overall top score of 289, set by David Brimlow, in 2001.

“My goal was setting the record,” said Helfritz, who has been competing in the Sunshine State Games since 2002. “I saw the record for my age group before the Games and have shot higher scores before.”

His biggest surprise was achieving the overall high score in the 900 round.

“I struggled,” Helfritz admitted. “The 858 is much lower than I historically shoot. I focused on the sight like in pistol shooting and not on the target like you should in archery. I was doing the opposite of what I should have done.  I didn’t figure out until near the end of the round.”

Footgolf made its Sunshine State Games debut on Saturday, August 8 at Mallards Landing Golf Course, in Melbourne.  The 18-hole competition consists of playing a #5 soccer ball with the foot from the starting place, usually called “Teeing zone”, until the ball is inside the 21-inch diameter hole.

Mario Calderon, of Melbourne, won the Open Division (18-45 years old) gold medal with a score of 60.  He finished two strokes ahead of silver medalist Mariano Copella, of Miami, and five strokes ahead of bronze medalist Julian Carlo Giantiempo.

Calderon and Copella were ranked seventh and eighth, respectively, in the 2019 American Footgolf League national rankings.

Bowling was held for the first time since 2005 at the River Lanes Family Entertainment Center in Titusville on Wednesday, July 29.

She returned to action in doubles competition to earn a gold medal with William Gibson, of Titusville, as the pair rolled a total score of 1418.

The best overall singles score was turned in by Brandon Fackler, a bowler for Cocoa High School, with a three-game score of 781, in the Division 3, 180+ average division.