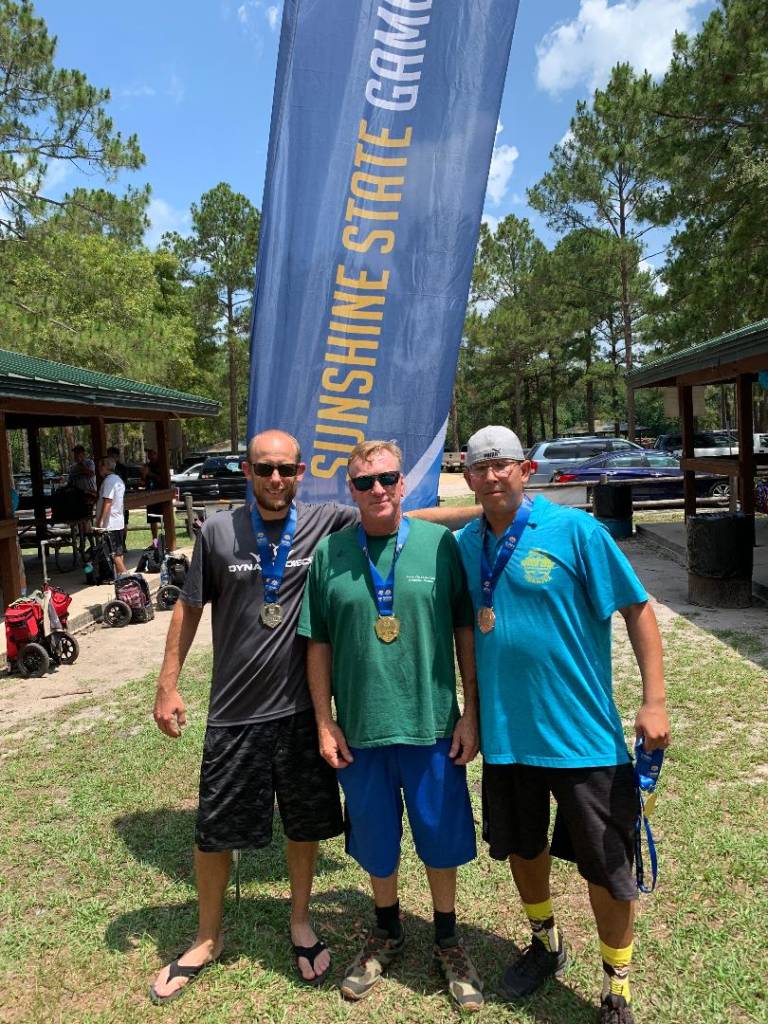 It was a classic Sunshine State Games Saturday with six sports in action in locations in six Florida communities. To make it even more of a classic, a mid-afternoon Florida thunderstorm brought one sport to a close and delayed another.

For Day Two of the Clay and Alachua County Festivals, the schedule featured Archery and Artistic Swimming in Alachua County and Canoe/Kayak Marathon, Disc Golf, Pickleball and Ultimate in Clay County.  The 2021 Sunshine State Games are a first for Clay County and the first time the Games have been in Northeast Florida since 1988, when Jacksonville was the host community.

The Pickleball courts and Disc Golf course, at Ronnie Van Zant Park, in Green Cove Springs, were the first venue to get things started on Saturday. Bob Satter, of St. Augustine (middle in photo), turned in the lowest score from the Rattlesnake Course, with a seven under par, 47.

“I had some good birdies and good shots,” said Satter, who also won a silver medal in doubles competition Friday night. “This is a real technical course and that’s good for someone my age.  I can play with the younger guys and be successful being more technical.”

Nick Olsen (on left in photo above) and Doug Sharpe (on right in photo above) were tied with a three-under par 51, for the next best overall score but Olson won the tiebreaker having birdied his final hole.

On the other side of Ronnie Van Zant Park, Sandra Civitarese, of The Villages, won her second Pickleball medal in as many days, teaming with Marria Crinion, also of the Villages, to win the Women’s Doubles 50-59 age group.

Civitarese and Crinion won all three of their matches in straight sets and defeated Lisa Deister, of St. John’s and Jennifer Latak, of Jacksonville, 11-8, 11-9, in the gold medal match

“Today was the first time I played with Marria,” Civitarese said.  “She was looking for a partner to qualify for the Florida Senior Games and I said, I’ll play with you.”

The Middleburg Boat Ramp was the starting point for the Canoe/Kayak Marathon races of six and 12 miles.  Lynn-Marie King, of St. Petersburg, had the fastest run of the six-mile course, with a time of 1:06:13.

The quickest on the 12-mile course on Black Creek, a tributary to the St. John’s River, was Mark Nye, with a time of 2:06:49. Nye, a resident of Fleming Island in Clay County, is a regular paddler on Black Creek.

Archery and Ultimate were affected by the afternoon thunderstorms. The 720 Round at the Easton Newberry Archery Complex and the International Round at Gator Bowman were cut short at approximately 2:00 p.m. with the leaders at the time collecting the medals The 900 Round at the Easton Newberry Complex and the 3-D Events at Gator Bowman, w\ill continue on Sunday.

The 3:00 p.m. thunderstorm rolled through the Plantation Sports Complex, in Fleming Island, brought Ultimate to a stop for approximately one hour.  The Mixed Division was able to conclude its pool play schedule following the rain delay and the Men’s Division pool play, was pushed back and completed pool play. Bracket play begins Sunday morning in Fleming Island.

The Gardens Synchro, from Palm Beach Gardens, edged the Gainesville Gaviatas in team points Saturday, to win the Mary Rose High Point Award for the Intermediate Division.  Gardens Synchro follows up the Tampa Bay Synch Rays, who won the Award for the Junior Olympic Division on Friday.

Mary Rose, was the long-tiime Sunshine State Games sport director, who passed away in 2009. Each year teams in all three divisions earn points to win the High Point Trophy that carries her name.

The third and final day of the Clay and Alachua County Festivals begins Sunday morning with four sports, two in each location.

Including this weekend’s sports, over 1,500 of Florida’s Finest Amateur Athletes will have competed in 12 sports in nine Florida cities between May 29 and June 13.