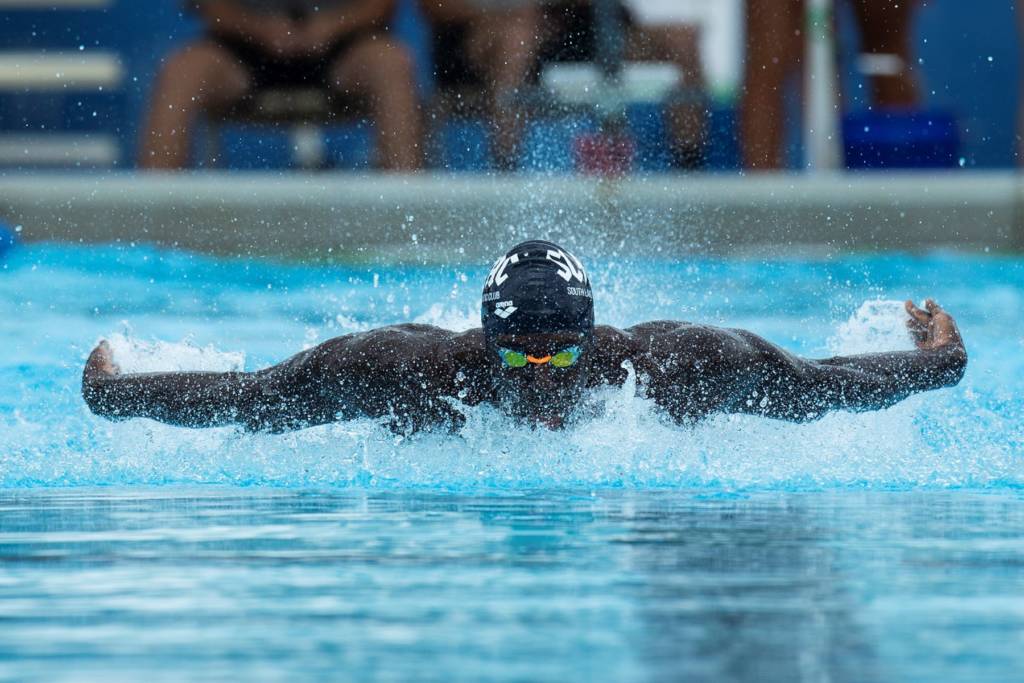 In Saturday’s Sunshine State Games Swimming Championship races, contested at the Dwight H. Hunter Northeast Pool, swimmers dover from the starting blocks a total of 2,357 times from one end of the 50-meter course to the other in 52 events.

Of the more than 400 swimmers competing, two with years Sunshine State Games experience, their dives into the pool certainly surpass that impressive number.

Alex Forbes, of Apopka (at right), earned the 2000 Sunshine State Games Male Athlete of the Year Award and continued his success as a member of the University of Kentucky swim team, graduating with a degree in Psychology in 2010. He returned to the Games Saturday, as a 33-year old, to earn gold medals in the Boys 50 Freestyle, with a time of 25.04, and the Boys 100 Butterfly, with a time of 59.91. He was the only swimmer among the 35 competing in the 100 Butterfly to touch the wall in under a minute.

Forbes, swimming with the South Lake Aquatic Club, returned to the 2021 Games, in a tribute to his father and coach, Al Forbes, who passed away in March, 2020. He returned to the pool in an effort to represent St. Vincent and the Grenadines, the birthplace of his father.

He advanced to the Olympic Trials in 2012 and 2016 and will submit times to the Swimming International Governing Body (FINA) by June 27, to be considered for a spot on the St. Vincent and the Grenadines 2020 Olympic team. In 2016, the Caribbean Island had one male and one female swimmer represent the country.

“Swimming in the Olympics, to represent my country at the highest level, is a goal that has alluded me so far,” Forbes said. “Once my father passed away, I thought why not honor him and continue his legacy and swim for his home country in the Olympic Games.”

Marcella Ruppert-Gomez began swimming in the Sunshine State Games in 2012 as a 12-year old, swimming in 12 events for the Gator Swim Club. She was a member of a relay team that featured three other swimmers between the ages of 14 and 18.

Now 21, a swimmer and student at Harvard University, she used the 2021 Games as a training opportunity for a trip to Barranquilla, Columbia in an attempt to qualify for the Columbian National Team. Her mother is originally from Columbia.

“The Sunshine State Games have always been a fun event,” Ruppert-Gomez said. “I swam in the Games for the Gator Swim Club until our family moved to South Florida while I was in high school. I’ve been back in Gainesville for the last year. It’s a great city for swimming.”

Ruppert-Gomez won gold medals in the Girls 200 Meter IM and 100 Meter Butterfly. Her gold medal in the Butterfly was a close one. She finished with a time of 1:09.37, coming in ahead of the second and third place finishers, Abby Wolf, of the Central Florida Marlins with a 1:09.98 and Ani Veltcheva of Makos Aquatic Club with a 1:09.99.

Over 100 Fencers, representing 22 clubs from around the state, competed in Foil and Saber events in the first of two days at the Legacy Park Multipurpose Center.

Winning the gold medal in the Men’s Open Foil was Isaac Ariza, an 18-year old, originally from Peru, now living in Miami Gardens. The top finishers in the group showed the international popularity of Fencing, representing Brazil, Peru, Puerto Rico and the United States.

In the final event of the day, the Men’s 14 and under Foil, Vinicius Alonso De Paula, of Hialeah scored a 15-10 win over Alejandro Lorenzo, of Miramar, to win the gold medal.

Lorenzo was attempting to win his second Foil gold medal of the day after winning the 12 and under gold. The 12 and under division finished just before the 14 and under competition began.

During a little more than four-hour period of the afternoon, Lorenzo fenced in 15 matches, including two finals. He defeated Abraham Ariza, of North Miami Beach, 15-7, in the 12 and under final.